I actually was going to do another review, then realized I hadn’t written anything besides a paragraph or two on it. Which, I could keep writing, but I have video for it that I want to compile. It’s definitely been a learning curve getting used to popping over to the house to see Amber before going back to the apartment. It’s one of the reasons why being home was so convenient – I didn’t have to go anywhere besides a quick jaunt outside to feed or I could still get other things done in between barn time.

However, it’s been really nice to be able to sit down in our new place for convos with my best friend, and my sister came over for a while the night before and we got to chat and have a good time. I’m not regretting moving, but on days like today, when I get off at noon, I’ll try a different tactic than yesterday and see how I like it. It’ll be nice though cause after working the weekend, I have 3 really short work days this week (6 hrs) and get a 3 day weekend before finishing the week with 4 long days. It’s actually hasn’t been as bad of a learning curve as I was expecting tho – not like when we first got the horses there and it took me a while to figure out the timing of chores and fitting everything into my day. 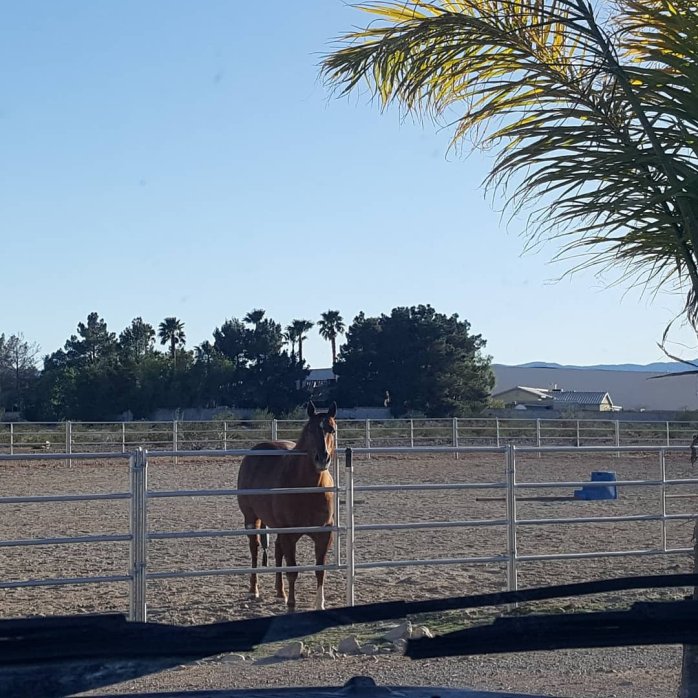 Just like today, yesterday I got off at noon. I was super excited to do something different, and managed to actually make it out in time to see my shoer finishing up with Amber. So her feet look good! And then coming to find out my farrier will be moving in a few months. WHY?! We then proceeded to joke about how he usually never swears, and not only did Amber make him swear, but I also made swear with my question. Like owner like horse? lol I usually miss seeing/chatting with him since I’m working, so it was nice to be able to talk with him a bit.

Amber has also been a fat ball of itch and was proceeding to tear out her mane itching on every poky surface she can find, so I gave half of her mane a wash. She actually put up with it – usually she abhors baths so I was surprised she stood stock still for it. I then decided to ride. She’s usually lit after a bath, and while I only did part of her mane, she likes to pretend she’s a Very Fancy Horse and prance and arch her neck and be excitable after any water on her body. Plus, the wind was still present and she hadn’t been ridden in at least 4 days. So it was a bit of a “is that REALLY that wise” question when I decided “let’s do something different and play around outside of the arena even though you haven’t been in weeks. And I laughed at myself and thought “why the hell not.” Haha oops.

Actually she was fine. I wasn’t surprised and yet I was. Usually she’s either jigging or consistently stopping, and she’d stop cause she was looking at everything, but she wasn’t jigging, and she wasn’t her occasional giraffe self when she’s like “OMG I SEE EVERYTHING.” So that was great. We meandered only a short walk away from the barn to this area behind a neighboring house that was a moderate circle. It was out of sight of our place, and the guy has horses, so I’m sure he uses that to ride as well because the ground is worked up and softer and not very rocky. I’ve been wanting to just do a teensy bit of work there just for funsies – nothing too serious tho since it’s not the best ground.

I started with pushing her into the bridle and while she was really looking and not wanting to push into my outside rein, I let that slide and rewarded her when she would actually start to push into the bridle despite wanting to continue looking around. She was pretty excited, so I asked for a bit of trot, and while she was certainly more lit, I was surprised that she very willingly started pushing and giving me this really floaty trot that was really easy to post to. She was actually meeting my contact, and it felt really really nice. Asked to walk, she really responded to my vocal cue and I didn’t really push collection. Going the other direction she was the same – really good, getting a bit floaty and it felt great. A couple times horses whinnied and she got very distracted, but she was really overall very good.

So we walked, and started walking back to the barn very nicely when Whisper really really called to her. We both heard it. And Amber proceeded to lose her brain lol. No very serious shenanigans. Most horsey people would probably say “that’s IT? That’s ALL you have to deal with?” which is pretty true. On the shenanigans scale of 1-10 she’s pretty much a 2 when she decides to pull them. But I could tell even in the beginning she may be getting a bit barn sour. I wanted to push her into the contact at a walk, but she thought that was an amazing opportunity to do her baby jog so that she could still get to Whisper. So I trotted her up into the bridle some more, did some leg yields which I was very surprised at how nice they were given we’ve a) never ever worked on them faster than a teensy jog and b) we’ve never really ever even schooled them for more than 2-3 strides. But wow was it sooooo much easier than getting Liam to do it haha. She was very responsive, but as soon as I turned for home she’d start to jig. So I tried lowering my voice and backing up a bit, which is usually all she needs. But that didn’t work.

So plan b, push her into a tighter circle. And that didn’t really work either. Her hip swung to the outside until I put my leg on and got after her and that worked a bit but she was definitely not getting any less agitated. So when I pushed her into the contact at a walk again, back to jigging. So I kicked her into a forward trot and trotted her away from the barn and back to that little circle and trotted a bit more. And WOW that horse can trot. She was in the contact the whole time and it felt really cool despite her being wired. She was a bit more responsive to my voice after about 2 circles, and as we were walking, me attempting to push her in a sort-of-ish fluid walk, she stumbled a bit (she hadn’t up to that point). So I hopped off to make sure all her feet were okay, and they were so I hopped back on and just asked her to stand and breathe a moment. It seemed the combination of trotting back to the circle and dismounting helped reset things. I let her walk back to the barn, and she’d occasionally start to jog before an ear flicked back and she’d walk. I’d praise her, and asked her to push into the bridle, and while it was nowhere near good, she stayed walking so I praised her some more and she got wither scratches.

Whisper was turned out into the arena and cantered very enthusiastically towards us when she saw us coming. They nickered at each other a lot. I let them sniff noses, then walked Amber along the front of the arena before walking down the driveway. I did the tiniest bit of trotting near the arena on a flat portion of our land because I wanted home to be work too, and that was a very barely-there trot haha. She was tired. So we did 1 figure 8 loop, sniffed the scary trailer, and dismounted. Poor girl. What was going to be a 10 minute ride turned into at least a 30 minute ride. She then got her grain and her hay out in the arena to chill.

I was really happy to know that her agitation had nothing to do with being outside the arena or it being windy or just having a mini bath. I’m sure those things contributed, but we were basically done and headed back until she heard Whisper call. So, while I’m not the happiest she and Whisper are getting very attached, I totally get they’re the only 2 horses around. It’s very natural they’d get attached. Both horses have been fine at shows, fine elsewhere, fine with basically everything else so I’m really not worried about it. She was still a very good girl, despite our little moment. Towards feeding time I brought her in, loved on her some more and she was nudging me with her nose and begging for scratches.

Today, I’m going to do the same thing. After yesterday, I have a feeling she’ll be really good today, but I want to keep it light and easy. Go to the circle again, 2 circles at the trot and walk back. Hopefully that will go well haha. But I’m optimistic. As I said, her shenanigans are few and far between, and her “good girl” days are usually 9 out of 10. It was a plus at the end of the ride she was listening well to my voice, and I think we both got a good glimpse of real contact out there so I’m pretty excited to get out there again. She may not be haha but we’ll see how it goes today.

2019 has been an interesting year to say the least - going back to school, Amber pulling out of her laminitis, and figuring out life, but I'm thankful for all that I have, and now is a good time for reflection and growth. See everyone next year! #bye2019
A little #nationalhorseday of Amber and Whisper ❤❤❤
It was 30 degrees this morning!! Choco has the right idea 😴 Vegas isn't supposed to be this cold yet!
When you're trying to study but the doxie wants your food 😂😂 #dachshundsofinstagram #doxieofinstagram #probegger #olddoxie
Obviously after getting the set I had to put it on Amber! I have no regrets lol It looks awesome on her. Thanks @psofsweden !! I love this set! #psofswedenteal #psofswedenbridle #quarterhorsesofinsta #quarterhorsesarethebest
The old and the new #psofsweden . My pad, wraps, reins and bonnet just arrived, and I am so glad I decided to grab this! It's absolutely gorgeous! Completely in love with this jade collection! 😍 #psofswedenbridle #psofswedenbrowband #psofswedensaddlepad #psofswedenflyingchange #psofswedenteal