Amber is special. In many ways. Cute, adorable ways. And not so adorable ways. Because her face just kept swelling until nearly the whole right side of her face looked like she’d been bitten by a poisonous snake. Okay, maybe not that bad, but before it did get so bad I’d called the vet and his soonest appointment was yesterday. Unfortunately, I couldn’t take time off of work to be there (right in the middle of the day), so my mom kindly took over the visit for me. (I have a few bloody pictures in here so if you can’t stand blood just don’t read or bypass the pics!) And what does the vet think? She abscessed underneath where her tooth was pulled. Even the vet said she’s special and weird – the only horse he’s known to do that. And what, per chance, caused this abscess?

After sedation and some poking around, he found an infected piece of bone that her body was obviously trying to push out, but was still attached to the jawbone. Thankfully, he was able to get it off so I won’t have to trailer her down there in a few days. And it’s a super rough, jagged piece of bone, too. That absolutely could not have been very comfortable. Then he made a small incision and drained and flushed the abscess. Poor baby was pretty drugged but she needed to be!

Interestingly enough, he asked about her scar on her jaw. She’s had one ever since I was first assigned to her – miraculously in the exact same spot that was her fractured tooth. Hmm. He theorizes that perhaps that bone fragment was from a previous injury – where her scar was, and that it may have started the process of her fractured tooth, and (where I’m theorizing) potentially when she smacked her leg and perhaps even just lightly hit her face, it caused everything else to snowball from there. I’m glad at least we got down to what it really was. I wonder if perhaps that piece was hiding all along, and only popped up because that tooth was gone and as the body was healing, it thought it was foreign whereas it hadn’t caused a problem before. 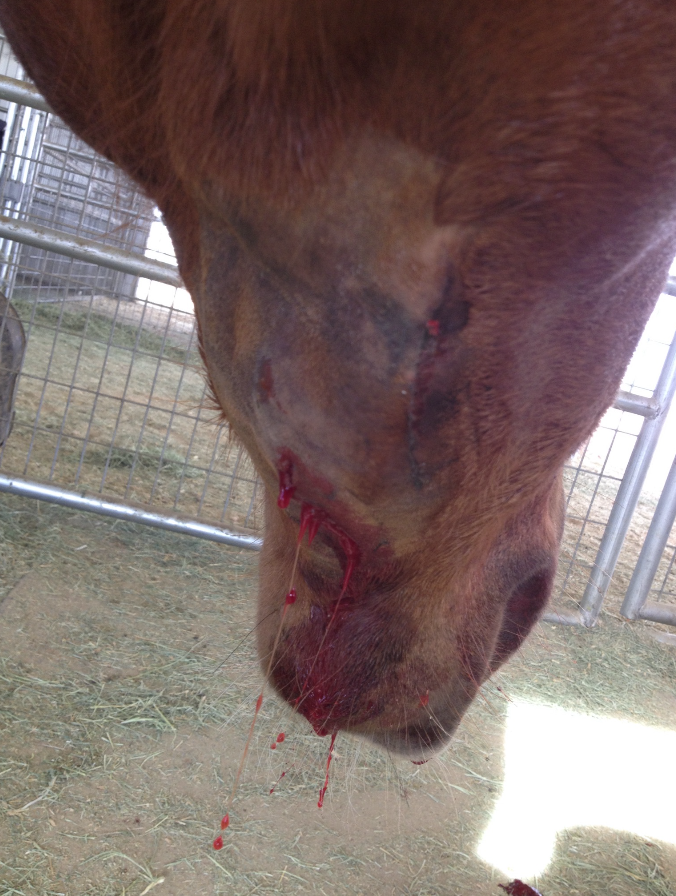 I’ll need to flush her abscess 1-2x a day, which I’m totally on board with, of course. I flushed it last night, and goodness if that girl wasn’t a saint – no halter, no moving, she just let me gently stick the syringe full of betadine solution into the incision and flush it out. I think it may have even felt good, because she just stood there and let me do it, then put her face against me afterwards as if to tell me thank you. I swear, this little horse, you guys. She absolutely looks so much better – her eyes were more alert, she was more perky, and she genuinely looked a lot more herself. I woke up early to do so again this morning, and she was again a trooper. I have to admit if I’m going to have a horse that needs vet care like this then I’d get a dozen like her. She makes meds and caring for things like this so easy.

The 3-day weekend was great – a good hang out with friends and my sister again watching some more comedic movies/shows with lots of wine, beer, popcorn and frozen foods. The best, right? Lots of dog snuggles, too.

It’s been in the high 60s, which is so awesome. I was wearing short sleeves or thin 3/4 shirts when I rode Whisper some as well, and hopped on Amber for a nice ride around the block. We stay to the asphalt or the not-too-rocky area right by the road since that’s easier for her to walk on. I know getting out and seeing the sights with Whisper is certainly better than aimless wanderings inside the arena.

Especially with Whisper around she gets very slow on the walkabout! She cares about a lot less, but is a good buffer when Whisper gets a little unsettled before relaxing again. It’s still pretty quiet here, though, not counting the lovely vet visit haha. At least on the asphalt or just next to the road I feel a lot less of a hitch in Amber’s step, and she stays happy through the whole thing. Many times it’s been a good 20-30 minute walk, which I know is good for her mind and muscles.

I’m also a little glad that because of all this time off, Amber will lose most of her built up muscle. As strange as that sounds, I have worried that her muscle mass was still a bit too heavy for her to really be able to do some of the things, and if we can get everything situated, then we’ll start off at square one building the lean muscles for eventing and not the heavy muscles she had from being ridden on inclines.

Hopefully, though, we have no more tooth problems and are in the clear with that!

14 Comments on “The special one”