While this post is going up as a “review Wednesday” post and will appear on my reviews list, as with every other product I’ve tried, this piece is merely my opinion based on my experiences. Supplements are extremely difficult because what works for one horse doesn’t necessarily work for another horse, and many times you won’t have the same results as someone else. But this is my experience with magnesium, and I hope it gives you guys additional information.

I will freely admit that I’m not the best researcher, and I don’t necessarily like researching things – except most things pertaining to horses. That I WILL try my best to research until I can’t research any more. I’ve gotten better about researching companies and products and finding reviews, and actually taking the time to wait for feedback on potentially polarizing subjects. But maybe I wasn’t Googling correctly or something, but I couldn’t find any veterinary published pieces that were recent (2016 – present). Most were blogging posts, and perhaps the closest I found was Kentucky Equine research and this article by Fox Den Nutrition that really went into how magnesium affects the body (although that was published in 2010 so….perhaps a bit dated on how it affects horses?). Of course please do your own research and speak with your trusted equine pros and don’t just take my word for it!

I feel that magnesium is sort of an understated necessity. In my nutrition classes and other equine college courses, I remember the calcium:phosphorus ratio being very important. Which don’t get me wrong it is very important, but I don’t remember going over magnesium a lot. It’s a little puzzling to me that we didn’t, considering all the things magnesium does. I liked these three articles explaining magnesium, though this one actually said what it did – “Calcium is in charge of contracting the muscle and magnesium looks after the relaxation or release of the muscle….. When a muscle cell is triggered, the cell membrane opens, letting calcium in and raising the calcium level in the cell setting off a reaction and the muscle contracts. When the contraction is done, the magnesium inside the cell helps to push the calcium back out of the cell releasing the contraction. When there is not enough magnesium in the cell, calcium can leak back in causing a stimulatory effect and the muscle cannot completely relax. This can put the body into a continually stressed state. Low magnesium makes nerve endings hypersensitive thus exacerbating pain and noise. Magnesium is required for proper nerve and muscle function.” Which….that’s pretty important.

(She was sooooooo itchy and happy a bunch of her hair was coming off!)

Leading up to buying magnesium, both Amber and Whisper were showing increased stress at our previous barn. Both were a lot more reactive than normal, so we began asking around – vets and other horsey folk in the community, and magnesium was a topic brought up a lot. At that point both Amber and Whisper were on an electrolyte (electrodex – they LOVE the cherry) since it was a million degrees and we didn’t have the lightest rides. Since we only wanted to supplement with magnesium, we found the regular Smartpak magnesium pellets since Amber will eat anything pellet but not always powder.

Within a week we noticed that they were much better. Amber was back to her usual self, and while Whisper was still a bit agitated at times, she too was much closer to her old self. Amber was less nervous, and whenever I’d put my leg on her she was also less reactive. For about 2 or so months, that worked really well for the both of them. They were much better on the magnesium. At the end of those 2 months we moved them to our backyard, and the rest of Amber’s nervousness dissipated. Amber liked the open spaces as did Whisper, and the barn was calmer. Whisper would still get agitated at things, but not like before.

Since then, they’ve stayed on the magnesium until the beginning of February this year. This winter though has been bad for Whisper. She paces a lot, and is a lot more nervous than we remember her being for the first 10 or so years that we had her. We personally think some of it has to do with our previous barn – we’d get bad winds and storms and most of the time she had no good protection from the wind. Wind storms are tough for her, but her pacing has worsened over the winter. (We think it has more to do with insecurity and sleep deprivation, as this article here seems to describe her to a T). I do think it is important to note that when Whisper seemed especially worried/nervous/agitated, we would actually give her more magnesium. So my mom had my vet, Dr. W, pop out for a visit and assess her. It’s really nice to actually have so many people interconnected. My vet and farrier went to school together, and my trainer is my vet’s assistant, so I feel I have a good network of good, knowledgeable equine pros.

After asking a lot of questions and Dr. W listening to my mom talk about Whisper’s differences, he suggested to take her off of the daily dose of SP magnesium as well as her joint supplement. He began explaining that there’s been a conversation recently amongst vets that too much magnesium may be negatively affecting horses. Unfortunately there isn’t an article I can reference, but I thought this was a very interesting concept. So that magnesium said to help calm horses, can actually end up potentially making their nervousness or anxiety worse? A lot of the articles I perused would say that what the horses didn’t need, they would pee out. But what if instead of “peeing it out,” it was affecting horses? 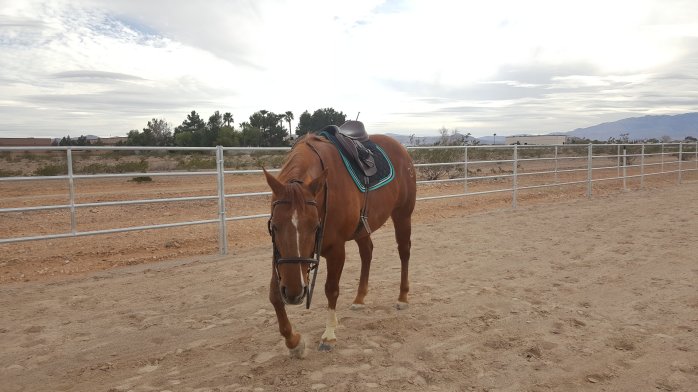 Well, the only way to know was to wait. I kept Amber on her supplements, but within about a week, Whisper was noticeably different. She wasn’t anxiously pacing. She was still pacing, but it was more a leisurely walk instead of the trot/canter/speed walk/trot that she had been doing. She was actually beginning to stop herself and stand still to sunbathe like she used to. We also noticed that she was a lot more herself during rides: she wasn’t as quick-moving and was willing to go slower, and she was also much less reactive when I’d put my leg on her. She actually felt lazy! Which is actually normal for her – I think we’d just gotten used to her being keyed up (for her anyway) that until she was “lazy” again we hadn’t realized something was different. While we don’t think the magnesium was the sole cause of everything, I can absolutely see that taking her off it has really benefited her. Storms still upset her, and while we will be trying different things in the future, it was really crazy to see how taking her off of the magnesium helped.

Huh. So interesting, right?! This stuff really fascinates me, and after Whisper did so well off of it, I took Amber off. She’s been off a month or so now, but I haven’t really noticed much of a difference in Amber. I think she is a bit better, but hardly noticeable for her. Not like the improvement with her going on the magnesium. She’s also in light to no work, so I don’t think the magnesium is really as needed as it was during the summer. Plus, not having her on that saves me some money, and any of her “problems” (kicking and whatnot) I think was due to her missing work rides and not the magnesium (since we’ve been “riding” more she doesn’t kick as much). As I’ve mentioned before, Whisper has more TB influence than Amber, but she also has a tendency to be more nervous and insecure than Amber just because that’s her personality, so maybe that has something to do with it as well. Personally, I do think personality has a bit to do with the pros/cons considering the different reactions we’ve noticed in the two girls. However, if Amber does go into slightly heavier work come summer, I’ll probably put her back on the magnesium, except at a lower dose every few days. I think it really helped her last summer, so I want to continue with that.

And while Whisper isn’t my horse, I do think that when she starts working harder and sweating in summer she should go back on magnesium a day or two a week. Especially with how hot it is here and how sweaty horses can get, I think the magnesium certainly helped last summer, but in the end it’s up to my mom what she’d like to do for Whisper. I just wanted to also say that while Whisper is so much better off of it, I would personally use it again for her in the dead of summer.

I hope this gave everyone some food for thought. This has been a very interesting subject to get some more information on, and I am eager to keep learning about it, too. I wish there were an article about the vets’ conversation, but when I asked Dr. W, that’s what he told me – no articles, just conversation. I’ll have to pick Dr. W’s brain next time I see him about the vet conversation and hopefully be able to repeat it and share it on here. It’s especially cool to me to compare and contrast our two horses – even though they’re the same breed, their bloodlines, personalities, and ways they were raised are different and create two very different horses.

What about you guys? Have you used magnesium with your horse, and if so how has it gone? Have you noticed negative affects on your horse or have they remained the same? Have they initially improved and then gotten worse or stayed improved? I’d love to know your thoughts!

← The weekend from hell
Sixteen is a good number →