Posted on November 30, 2018 by the_everything_pony

I of course was very happy to get to ride Soxie again. Trainer G had posted a video of her just eating up the tiny xc course (and I mean like….tiny because it is Vegas after all) and getting super duper excited. It was a lot of fun to see! The lady who was leasing her previously isn’t leasing Soxie anymore, so I think she’s going to be one I get to ride a lot more often in the future! Which is great because this mare is super cool.

We started off with some long walking and leg yielding. She’s just a tad stiff when she first gets to working even though she’s still young – not unlike me, so I get it lol – but I mostly had no contact and just asked for a bit of circling and leg yielding. I think it did help a bit because when we started trotting, she was certainly still stiff, but she was a lot quicker to reach down and start stretching through her back. We moved to the open arena after that and continued our trotting.

The ride itself was pretty simple – a cavaletti to a crossrail, and (further down in the lesson) a diagonal red in and out line and a diagonal yellow crossrail. I was behind Soxie’s movement our first jump attempt, but I don’t quite have the stability yet for it so I was with her on the cavaletti but behind for the crossrail, and she clunked it pretty good. Next time around? She jumped me out of the tack a little because she was NOT going to touch the pole again. Haha! She was a little strong through the lesson, so we worked on straightness, waiting for the strides, and I was really starting to get the hang of it by the second or so time we cantered through the exercise. I really need to resume my PT exercises tho lol.

We worked a lot on my abs and shoulders with Soxie. She likes to pull a bit and get strong, and she tends to land hard as well, so it can be difficult to get her back up. In my effort not to pull and lock my arms, I tend to overreach them, stretch them away from my body and let my elbows get flappy. Trainer G gave me the tip of elbows tight to rib cage, since Soxie was getting stronger at that point, and to perform a simple change in the corner to the yellow diagonal fence. Nailed it that time! And it felt great!

A few times we were wiggly, but I was proud of myself for getting it done, making her wait for the canter strides to the yellow fence when it was a ground pole and through the in and out which was a soft 5. But she was super excited to jump, just a little strong and woohoo about it since Trainer G had jumped her 3 foot the day prior lol. But she’s certainly not naughty or mean – she’s a jumper at heart and she gets strong and excited. I was a little concerned that I might be a little more nervous on a strong horse, and Soxie can want to run away a bit, but I was glad that I wasn’t the least bit scared on her. I know she’ll come back, and once I got the elbow/ribcage trick with her it was pretty much smooth sailing. We even got a lovely flying lead change too. 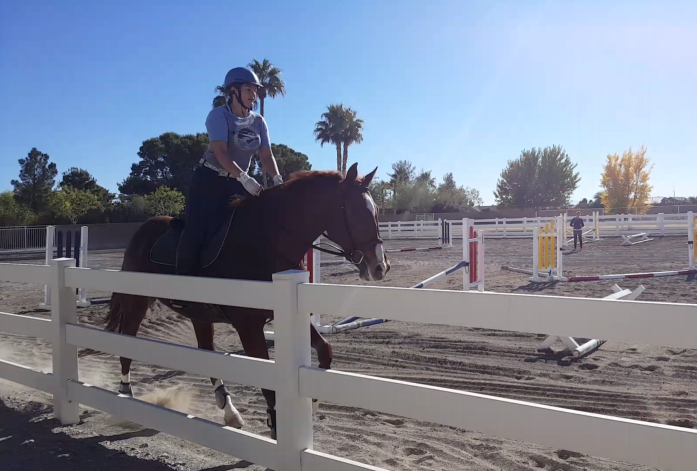 We rode the yellow fence to the red in and out – both trotting, and we were successful! It wasn’t the prettiest lesson, and I didn’t feel quite as in sync on Soxie as I had last time, but it wasn’t bad by any means. She was a little excited, a bit nervous perhaps since I’m a new person, but again, I think it helps that Trainer G and I ride and think similarly. I am still learning Soxie, and I was happy to get to ride her again, and I think she’s a perfect mid level horse for me. The other, bigger warmbloods are great for me to get a really good workout and work exclusively on my position, while Soxie is a much more sensitive ride and challenges me with my position and my awareness of how she’s doing.

I REALLY need to pay attention to my left arm tho. It likes to flap out and my pinky does weird things like not gripping the reins which like…. hand. WTF. It’s this weird rogue thing that does not obey my brain lol.

While this lesson wasn’t as mentally challenging as my last one on Rocky, I was still really happy with it. It felt like a normal lesson/ride of working out the kinks and me and the horse getting to know each other. Or a similar feel to a training ride I would have had on Amber.

So a great lesson, and lots of media!

Also, Trainer G has been using bluetooth because neither one of us like to have to shout to talk to each other across a ring. I am totally in love with headsets now. Must have lol.