Posted on August 3, 2018 by the_everything_pony

It has been a whirlwind week. Over the last week or two, Whisper has been odd. I was REALLY having to remind her to get back on her hindquarters, she was a lot more unwilling to work, and she’d start biting at the air whenever my mom would saddle her or I would put my spurs on her – even if they were the small little English nubby spurs I use on Amber. This was absolutely not like her. At first I thought perhaps she’d lost fitness or was giving us a few of her very rare “no” moments. But after a bit of a tough ride, and still a not-too-productive next ride, she still wasn’t better after a week and I rode her again. That ride, to the right she felt a bit wiggly, and it felt harder than usual. To the left though, if felt as if she’d lost all of her rhythm and cadence and that’s her good side. That piqued my interest, and I started a deep tissue massage on her a few nights later after I’d gotten to thinking. I really worked over her SI and Psoas around 3 nights in a row, and she was certainly improved by the weekend. No biting the air when I’d use spurs or when she’d be saddled. She still was just NQR though, so my mom made a Monday appointment for the vet to look at her. Since the vet was coming out, we figured he could check Amber over as well since it was time for her 1 month post-first-vet-visit visit. 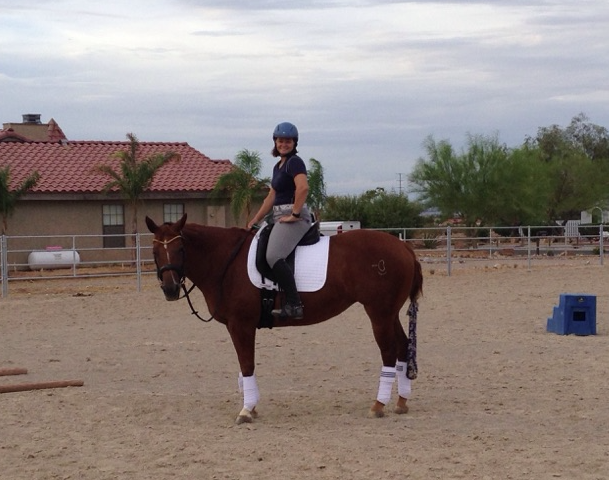 He did a flex test on Whisper, and noted that she flexed a bit positively on her hocks. While her SI could certainly be the culprit, Whisper IS 16. We don’t believe she had any injections when she was younger before we got her when she was 4, and she’s been in consistent 4-6 day works (although those may not have been extremely HARD rides haha) for a good 12 years. Over the past 2-3 years, we’ve really worked on rocking her back and utilizing her hind end. This year alone we’ve upped her fitness since the Feb show, and have had increasingly intense – though short – rides so we can prepare for the Sept-Nov show series. I’m honestly not too surprised that it was probably time for a hock injection. Since she’s a sensitive horse, I think the injections will last her a long while – hopefully longer than a year, but I’m not too worried. Compared to Amber at the moment, Whisper is EASY-PEASY.

After Whisper’s flex test I grabbed Amber for him, and his immediate answer was “I still really don’t like this.” Well, damn. I thought she’d been doing pretty well actually. Over the month I’d actually taken down her walk time to 15 minutes, but increased to a bit of trotting for 10 seconds 2-3 times in one ride. The second walk of the day would be outside on pavement for 20 minutes. She did pretty well with this – ahhh or so I thought. So far, it seems the stifle is actually fine and all well and good pretty much, but he’s puzzled about why she doesn’t want to bring that RH forward. She walks really well on the street and stumbles a lot more in the arena with that RH. So we decided to inject her stifle with a steroid to help in case there was some build up of arthritis or tenacious inflammation that’s hindering her from wanting to bring that leg forward.

His words were “You’re (Amber) going to drag this out all the way to the end, aren’t you?” and “You’re lucky your mom loves you so much.” Truer words have never been spoken. If that doesn’t describe the both of us to a T I don’t know what does haha.

After walking her Tuesday she looked more comfortable. The steroid helped with the inflammation I think, and she was actually quite willing to bring the leg forward and only had a few bobbles in the arena. I was ready to just go ahead and start the IRAP process if that’d help her feel a lot better. However, the farrier came out Wednesday, and after he pulled her shoes told me to come look at her LH asap.

Amber has a new diagnosis – she has laminitis in her left hind foot. And pretty progressive laminitis at that.

Looking at that foot on Wednesday, and after hearing the farrier say that it looked a lot like a laminitic foot, I knew they were right. I knew it wasn’t anything good. So I scrambled my schedule around and got her in to the clinic on Thursday. I wish I had the x-rays to show you guys (they will hopefully be emailed to me and I’ll post them) but I don’t think she really has more than 5 or so millimeters of sole between the coffin bone and outer sole. At first, after just watching her walk the vet wasn’t convinced. He seemed quite surprised and shocked after seeing the x-rays. (After finding that, all 4 feet were radiographed to make sure they were okay and to get a baseline) I don’t blame him. We both discussed how she doesn’t walk AT ALL like a laminitic horse and unfortunately, her symptoms were believed to be and clouded by the recent surgery to the RH stifle. Because honestly out of most of the symptoms, she really only noticeably did the “reluctant to walk forward” one, and we both just figured it was due to the stifle.

But she wasn’t bringing the RH forward because that would cause her to put weight on her LH toe, and that hurt. For it to be so progressed though means that it’s been building for a while – not just post-surgery. I’m thinking it’s back to when she really injured it – during the show in November. Over the past 8-9 months she’s just been consistently weight bearing on that LH. Either way, as all of you know, this isn’t a good development at all.

So Amber has been taken off of everything – no stretches, no walks, no riding. Just stall rest. She is now wearing some soft ride boots, and by evening, it actually looked like she felt better. She was walking quite a lot more than she has for a while, so I think she’s more comfortable. I sure hope so. I suppose it’s pretty obvious to say that Amber is officially retired. Nothing more for her. The only silver lining I can find at the moment is that it’s a hind foot and not a front foot. Ironically, both the vet and I mentioned how it looks a bit like Barbaro. I only hope it doesn’t develop in any other foot and that we caught it at an okay time.

I’m still going to be following everyone and commenting, but unless there’s an update I’ll probably not blog more than once a week. I still want to get my reviews out and am planning to go back to lessoning hopefully within a few weeks, but it’ll just take time for me to fully process everything and really get a solid outlook on where I want to go from here – be it buying a horse, leasing, or continuing to lesson for a while. Buying is certainly not in the cards yet, but leasing or lessoning are certainly options that I’ll fully decide in the future. Mostly though, I’m just focused on getting Amber as comfortable as we can get her, and hopefully manage this now that we know what it is.

← Dealing with the heat
X-Rays of Amber’s foot →

30 Comments on “A new diagnosis”