The end of May, my sister and niece Kaylee came to visit. Kaylee is 4 now, and is still the cutest, most opinionated niece ever. I am totally not going to lie that being the “cool aunt” was absolutely awesome haha. I would come over in the morning to visit and after five minutes of being excited to see me, it was “are we going to ride Amber?!” It was great.

My mom has a beautiful Pre de Nations saddle that she’s kept forever in her trunk, and it’s been labeled as the kid’s saddle for whenever kids (more specifically grandkids) were to ride. Well, Kaylee immediately wanted to see the saddle, and try on her kid’s helmet that I bought her as I assembled the kid’s stirrups onto the saddle. So then obviously, we had to ride.

I wasn’t sure how much Kaylee would be able to do, but my plan was to have her sit on Amber all by herself and try to start steering Amber. So I grabbed my Lund bridle, my extra pair of spur straps, and lashed together a sidepull to put on Amber so Kaylee could start practicing steering. I let Kaylee do as much as she could, such as leading Amber and brushing her. Safe to say it was her favorite part of the day. And Amber….. Well, Amber was just the best. I’ll let the photos tell the story from here <3. (Let me know if the videos don’t work! I’ll compile them into a youtube video if they don’t) 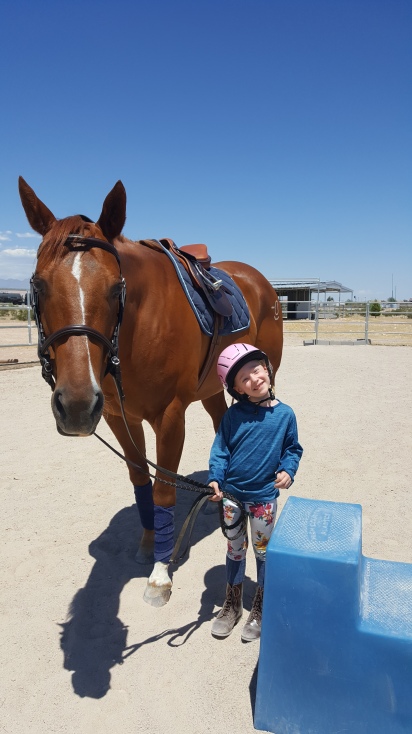 ← Lessons! And a very hot weekend
Catching Up →

11 Comments on “Best babysitter ever”