Yesterday felt like we were finally making more progress with everything. It’s been a “hurry up and wait hurry up and wait” for the past couple days with nothing much seeming to get done, and it wasn’t too different yesterday, but still felt like more progress. They finished digging the holes and putting up the arena fence, which looks fantastically huge. 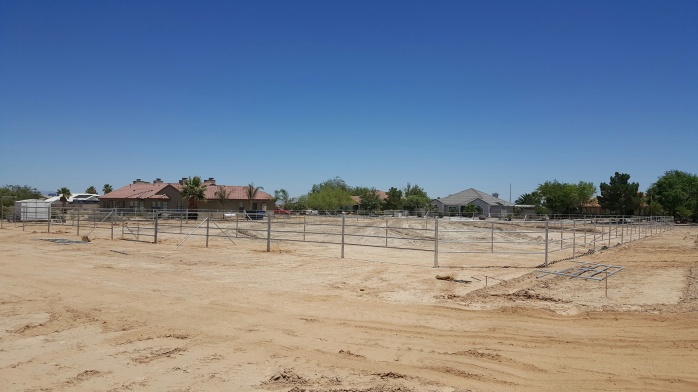 It’s measured at 125×187 at the moment. We have a few extra panels because the length was supposed to be approximately 200ft but if we’d kept the length then we would’ve ended up being on the pipes we’d recently put in so we could run sprinklers. So, it was shortened, but it’s still a great size!

The cement truck finally arrived shortly before I got home, so I got to see them pack the holes and smooth them. My mom and I had originally thought that they’d cement the poles in the concrete but they are actually using anchor plates so they can make sure the barn is completely level. So, it was hurry up and get the cement in, then wait the rest of the day/night for it to cure.

The guys left shortly after 1 when all the holes were filled. I had planned to ride after but that had to take a backseat to the heat. It was only supposed to be 95 but it had climbed up to 101 by 2 and it was still 97 with 6% humidity at 5. We had an excessive heat warning from 11 am to 11 pm. Yay. And I live in the desert why again…? But the guys came back around 6 to cement the arena posts and then set out the panels into the shape of the barn to make it easier to assemble this morning. Looks amazing to me!

Amber is usually never stupid after she’s had time off. She’ll be excited and want to runrunrun! for a little while and then she’s ready to settle into work. But, as I witnessed Saturday, even with peacocks, an animal she’d never seen before, she was calmer and more focused than when I hopped on yesterday. I realized just how uptight she was. She was fluid on Saturday as we warmed up to the work, putting her brain into the work and really feeling like we were going somewhere. But last night she was so tense she felt like she was going to explode. Back were the horse eating monsters in the trees.

I had set out just 4 poles. They weren’t elevated but they were spaced to make her reach. I wasn’t planning to ride for long, just something easy, but guys this ride made me really depressed. I worked with her more on just settling, using the tools that Instructor had suggested on Saturday, and very slowly she began to focus more. She was backed off and looky trotting the poles to the wall of trees, and then nearly zooming the other way going to the gate and away from the trees.

Perhaps some of the “calming” work we’ve begun would’ve helped me the other Sunday, but now I’m not so sure. She was tense and tight and she never settled. She wanted to look for the grid and I know she wanted to be good. She never wants to displease you. I know that horses have to work even when they’re unhappy, and they have to develop work ethic and I felt her throw a bit of attitude Saturday, but this was a totally different feeling. She’s been nervous, and she anticipates, but guys she felt horrible last night. She felt so unhappy. And it’s so depressing in lieu of how good Saturday was. Before, I would’ve told you that I have never felt her this about-to-jump-out-of-her-skin as she was yesterday, but I’m realizing that I’ve felt her this way for a good few months now. And I feel doubly guilty because I’ve kept her here in a place where I’m just realizing now how unhappy she is.

She felt all wrong last night. She did the work, and she tried, but she felt afraid. I did not like it at all. And I am remembering what I said on Monday – that she felt a lot more like the Amber I’d had a year ago. It was a big open arena that we rode in on Saturday, with one short side having trees, but she could see through them. Here, the arena is small, a disheveled oval space, and maybe only a fourth of it isn’t blocked by something. Slowly but surely, she developed a fear of this arena.

I don’t like pushing “human emotions/conditions” on horses, but I wonder if she’s getting claustrophobic. She was never wild last night, but her “forward” was “omgomgomgomgwhatisthiswhatisTHISohgodit’sbehindmeandohokayIcanseeoutofhereohCRAPIcan’tseeanymoreWHYARETHETREESMOVINGANDTHATOBJECTISMAKINGNOISE”. Saturday she was truly forward. Part of me knows she’s not spooky and that I should really work with her to just get over it (because she’ll have to if I want to do xc), but the other part of me hesitates. The water tank is right by the arena, and the owner will check on it frequently and pop up every now and then and then the bunnies and snakes rustle in the underbrush, and the bottom of the arena has belting on it so she can’t really see anywhere.

I don’t know. Do you think I am making excuses, guys? What’s your opinion? I take caring for her physical and mental health so seriously. I want her happy and healthy and enjoying her job. And she hasn’t felt like she’s been enjoying much of anything recently. I did feel her begin to shift focus and listen to me last night, and while that was better than we started, I still feel really discouraged. But, our barn will be done soon. She’ll probably be in our backyard Wednesday of next week at the latest. So I want to continue working and calmly using those new exercises to shift her focus, but I’m not sure if it’s “worth it” to push it since we’ll be moving soon. What to do? Based on how she’s been with more open arenas, I think she’s become petrified of this one.

What do you all suggest? What would you do in this situation?