So I think I will be renaming these Review Wednesdays. I’ve done a few reviews on English tack so far, so I figure it’s high time I review a Western product. And the first product on the docket? My saddle. 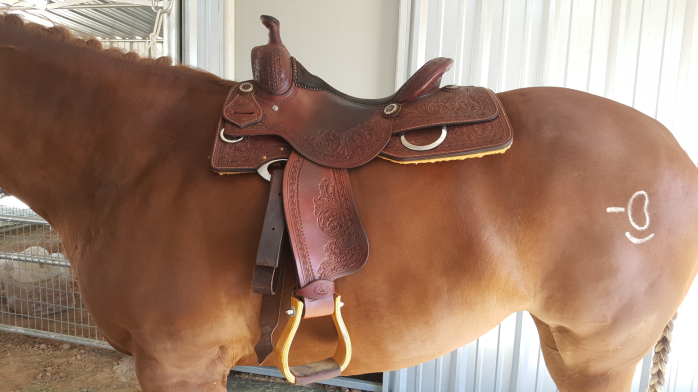 At the time I bought this saddle in 2015, it was called the Elite Cowhorse saddle. Now, it’s technically the KO Elite Reiner Saddle- KOE-1706 on their website. I stumbled across the company when a friend was looking for a saddle and she took me to their booth at the futurity. It has no “padded” seat, and I was expecting it to be hard as a rock. And surprisingly, it was extremely comfortable. It helped her sit well so she bought one and then left it with the trainer and I to use. And use it I did.

That saddle became my staple for every horse I rode. Since it is a cowhorse saddle, it’s meant to sit you back and be uphill over the withers so that it’s easier to keep your seat when your horse is cutting a cow. It was especially helpful on those downhill 2 yr olds that were still growing, and it really just sat you nice and straight in the saddle. Because it sits you back and was a smooth seat (no suede), it also made it very easy to sit those hard stoppers.

But the biggest reason I chose the saddle was the fit. I’d been using some saddles that appeared to fit her in the withers, but what I wasn’t paying attention to how wide the channel was through the back of the saddle. It’s what first alerted me to the fact that while Amber is wide in her shoulders, she gets even wider towards her hips. And although this saddle is a square cut, it did exactly that – it was broad for the shoulders, and even wider in the back. 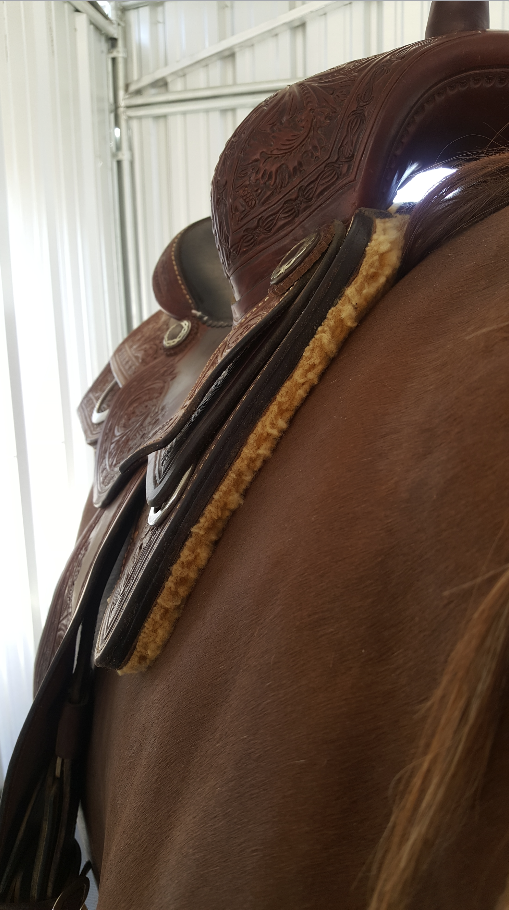 The shoulder fit for Amber is phenomenal. You can see how seamlessly it fits on on her shoulders, and I could immediately tell the difference in her comfort when I rode her in this saddle versus others. The channel in the back was wide, but I’d also seen saddle skirts that cut in even when it was broad in back. Amber also didn’t like these as both of her last ribs are nearly as far out as her hip bones. But this skirt cleared it with room to spare. 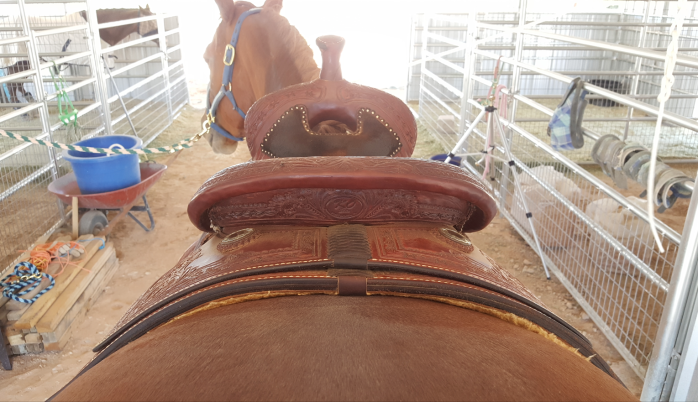 The saddle used to be a very dark chocolate, but it has lightened to a reddish brown now. My friend’s saddle was lacquered and stayed chocolate, but I’d had a not-so-good experience with lacquer before that so I’d opted for without.

This saddle was custom (but not fit-wise), and it really didn’t change the price tag any. I simply asked for a suede seat in chocolate to match, and that was what KO provided. When I visited their store in the Fort Worth Stockyards, I picked my own conchos, the tooling pattern and specified the suede seat. It came with both side latigos and a back cinch (which I have somewhere but alas, have not looked through all my bins). The saddle also came very very oiled – I’ve had it for two years now, used it about 4-5 times a week and have yet to need to add anything to it. I do keep it in a cover and dust it off after I ride, but I always check it to see if it needs a coat of oil.

So if you have a very wide, stocky, hard-fit-QH I highly recommend this saddle. It has been the only saddle (and I’ve tried a few other brands since) that has perfectly fit my horse. I have never ridden a wide QH that didn’t like the saddle – even the 2 yr olds rode in it well. It sits you perfectly balanced on the horse, and is one of the most comfortable western saddles I’ve ever ridden in. Their customer service was also very good. The lady who had taken my order and I had a misunderstanding about the suede seat, and they built me a whole new saddle with the right seat free of charge. Personally, it’s a 5 out of 5 stars for me.