So I want to start off with a muck rake advertisement: it’s not just for mucking.

Amber nickers at me now when I’m finishing up mucking poop because she desperately wants her scratches. You know, because I don’t ever curry her any other day and buy TTT things for her itchiness…. I’m torn between laughing that she nickers and thinking it’s the cutest thing.

I got tons of media this weekend! It was also very very fun.

Even though I had my stirrups shorter, it was good to see where our dressage is headed. It still needs a lot of work, but now we’re getting 5-7 really nice strides of good trot like this: 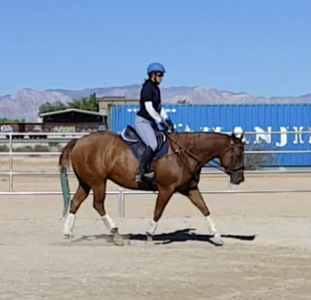 But most of the time our trot work looks something like this (with me looking horrible):

Our good stuff probably still looks like hunters, or perhaps our new term of huntssage, but I think we’re doing okay for us at the moment. We’ll keep plugging away at it and hopefully nab a few lessons before the year is out (because really, I need it way more than she does).

I undid her forelock on Saturday… Guys, it was HILARIOUS. I couldn’t stop laughing. Seriously.

I tried to tame it. Still looked hilarious. She did not appreciate me laughing at her.

All in all, Saturday was a blast. She looked and felt okay, so I went ahead with my plan to raise up one pole. We’ve been cantering over poles just fine for the past few weeks, but slow is many times better with Amber. If I just let her figure it out at a slower pace, once she does she’s usually on it every single time. She’s a super trier.

So we trotted over it every single time. And while MY position was certainly atrocious most of the time, it was so much fun. So many laughs. Especially this first time over it:

She’d gone over cavaletti at this height, so I was thinking she’d just trot over it…. Yeah, she surprised me. My mom and I had a good laugh though because she’s just so cute and you can see the wheels in her brain turning as she tries. And while I certainly need to continue getting stronger, this is better than the last time I popped over a crossrail to test out a saddle 6 months ago…. But here’s a closeup of her over-exaggeration.

I have to say that I think she looks pretty darn cute. But, because she over-jumped the first one, my body went into hunter mode for the next try, and I was definitely the one over-exaggerating a lot more that time.

After that, though, true thinker that she is realized she didn’t have to give it so much clearance. And mostly that was all Saturday was, really. I just wanted her to get acquainted with something higher, figure it out, and also for me to (try to) stay out of her way and let her figure out what was needed. She only got a little wobbly once, and I only had to encourage her once (after the first pop over). Otherwise she felt focused on the task at hand. This one was my favorite:

I love how expressive her ears are, and to me it’s a good sign she’s not racing off afterwards. She tends to get like that if she gets worried about things, so I was really pleased to see and feel her calmly hopping over by the end of 5-6 tries like it was nbd. It was also good to see that there’s still hope for me and my position – no over-exaggeration, and no hands freezing on her neck that time! (Though don’t get me wrong – plenty to work on for me!)

My new ice boots had finally come in, so I got to try them out! It’s not the best working with ice cubes but I didn’t have anything else yet, so I’m going to DIY some gel packs and see how those fair. Or ones from Walmart. Whichever works better. But her legs felt great afterwards, and she stood in them like she’s always worn them. Good girl!

But she was really really super on Saturday. I’m so pleased that it really didn’t seem to phase her!

I think I’m going to try cutting her days off to only 1 a week. It’s difficult for me to ride on my two 7-5 days, but I’ll probably just try to make one of those days another hack. Brain wise she’s really good in that if you give her a day or two off after you’ve had a difficult or not-so-successful ride she is absolutely on it with a vengeance your next ride. But I think body and muscle wise as we’re venturing into a land of new things, it’ll really help her to have another nice long ride that’s just a good, marching walk outside the arena.

Saturday though was overall super fun. She did look a little short at times, and I’m thinking perhaps it’s because her feet might be a little long. She seemed just a touch sore in that right hip, so I’ve been doing a few more stretches and exercises with her to hopefully help her stay looser.

Sunday was our usual hack and I think she is beginning to understand even the difference between breastcollar and no breastcollar. As soon as I started putting it all together with the girth she started getting antsy, touching me with her nose and glaring at me like “let’s get on with it, ma!”. Seems like she knows those are the fun days! She’s also learning that if we mount up outside that means we’re going for a hack, and she’s very excited about that too.

She was really great – didn’t call once and kept up a really nice marching walk. But this was a direction we’d gone before, so I had a feeling she felt more comfortable due to the familiarity. Most of the time she walked very forward, but I am starting to read when she’s just about had enough. Especially since we’re not doing anything of great brain-thinking importance, she gets done with trail rides very quickly. 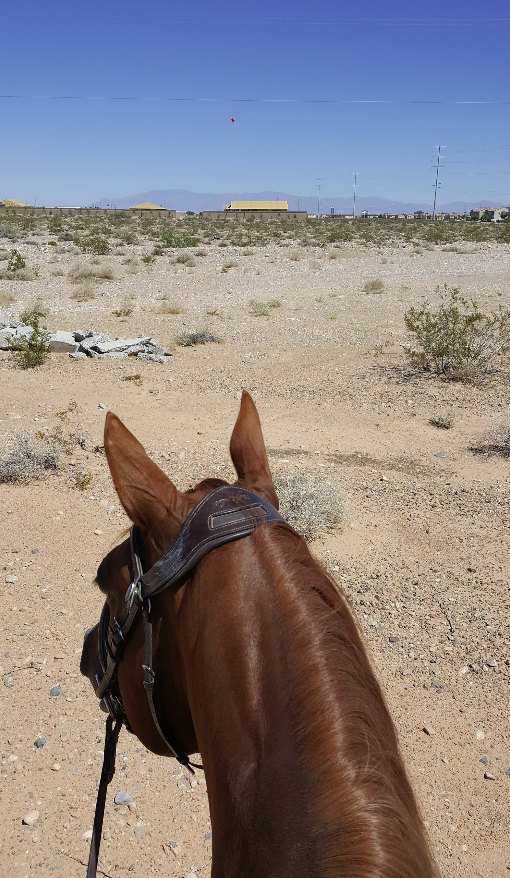 But we were actually gone for about 45 minutes, which was a really good stretch of walk. I did have to start some steering when she seemed a bit racey towards home, but then she settled and was absolutely fine. It was also a really great opportunity for me to drill my dressage position because many times I focus on her and not both of us. I could feel when it was right, so it’s just a matter of making that a habit now.

All in all, it was a great, fun weekend, and hopefully, I’ll get better so I can better help her out, poor thing. She’s so forgiving of me. Which I need it because a lot of things need a lot of work. Which comes with the territory of starting 3 new things at once, but I’m just really grateful that Amber really is so forgiving and puts up with all my mistakes and still loves me. On to dressage days!