Posted on November 15, 2017 by the_everything_pony

Western day dawned a bit cloudy and colder than I am ready for. But still, I was ready! So was she. Amber was much calmer Sunday, but still worried when faster horses would come too close. Every class on Sunday Amber did the patterns by herself, and she definitely seemed happier that way. The only class I was concerned about was reining. We hadn’t really worked on circles – just the quality of her canter – we only practiced spins once, hadn’t touched rollbacks or soft stopping, and didn’t really visit potential lead changes. Sooooo that was going to be interesting lol. But we had been practicing our left to right simple changes.

Ranch riding was first, and instead of poles, they used sticks of wood. Which makes total sense, and because other horses were freaking out a bit at them, I had the sudden apprehension that Amber would be like OMG WHAT IS THIS but no. She had seen these and walked over them before on plenty a hack at home! She was great. Tense at first in the pattern, but after realizing no more uber scary people on the other bleachers she went into her left lead so soft and nailed her left to right simple change! I let her out a little, and she sped up a bit, but felt so manageable that I knew I’d be able to collect her back up. I was smiling so big at the end of the pattern, and knew we’d done a solid one. And we did! We earned a 70! We were in the lead for a while until the last person got a 72, but still, second out of ten was great.

I may not ever get a 70 with her in reining to fulfill my goal, but I will gladly take a 70 in ranch riding instead! Goal fulfilled! Also, sorry I only got snippets of my first few patterns – I’m just glad I got snippets at all lol. Next up was reining. Her spins were cute but not amazing, but her right lope off into the slow circle felt very soft. She was a little reactive at the top of the arena next to the cattle chute, but short of letting her shoulder fall in and shaking her head a fraction she didn’t do anything. Such a good girl. I took a chance and asked for the right to left lead change, and we nailed it even going into a small slow! Which Super Good Girl, Amber, because we didn’t practice that at all lol. I went into 2 pt just like the right circles, and I felt her respond – a bit but just enough. You can see her ears flicking in the first large fast – it’s when I was smiling huge and telling her she was awesome and she had this. I tried the left to right lead change, and it was a nope so a penalty there but I figured we’d have one. And then our stops were a bit abrupt and our rollbacks a bit non-existent but I was over the moon with her for how little reining practice we’d actually done. We got a 62 which was enough to earn us 3rd out of 7 (not bad!).

I practiced trail then for a bit, loping over the lone pole. It’s hard for her to maintain pace and lope slowly AND go over poles – not to mention we have been jumping so that’s one thing lol. We schooled that for a bit then I hopped off for a quick rest before heading back out for our horsemanship pattern. I went to walk her up and she felt really odd for a moment. Then felt really odd again as we jogged off, as you can see on the video. Well, throughout the pattern and then more walking after, I didn’t feel it again. So that was weird. It was a hard pattern, starting without stirrups and then picking them back up in the walk, but the class was called, and we managed 2nd out of 7!

Then I hopped off and it was lunch time. She got all her tack off and we ate, then hopped on a little early to walk around for our western dressage test. Again, we were the only ones, so first place, but I wasn’t quite in agreement with the judge for this test. A couple things I think we should’ve scored lower on, but hey, it’s fine. The judge told me at the end of the test that she really liked Amber as a western dressage horse. Well, that was nice!

We had a bit of a wait for trail, so I hopped off again and Amber snoozed while I looked tired. We were both pretty tired lol. 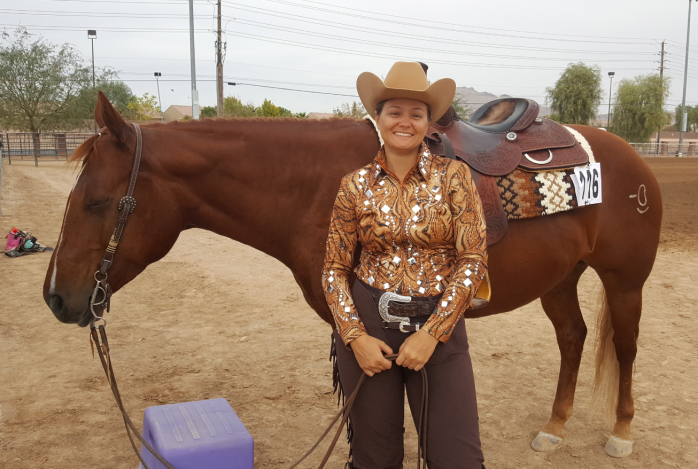 She got a little tense before the start of our trail pattern, but was a Super Good Girl and responded so well to everything I asked. You can see the big smile on my face after the lope over, even though she sort of hopped it. I was just so pleased with her regardless. She tried so hard after such a weird previous day, and was with me in everything I asked her. I couldn’t have asked for more from this little Miss Thang that always gives me 110%.

Amber got to rest and eat at the trailer as we waited around for the buckle announcements, and I took that opportunity to speak to the judge and ask her what she liked, didn’t, and what I could do better. She asked my number, and I told her, and she said “Oh! God, I loved that mare.” I didn’t really hear much of what she said after that lol. Even after our hectic English day, it really made my heart soar that the judge could see just how special of a little mare she is. She said she absolutely loved her as a western dressage horse, better than an English dressage horse. Which Amber is very stock-type and is not your typical dressage horse, so I can very much see that. And who knows? Maybe after eventing we’ll do western dressage lol. But she explained the tension she’d see in Amber which caused her to be fast-legged, and she preferred a little slower-legged horse. Good to know. 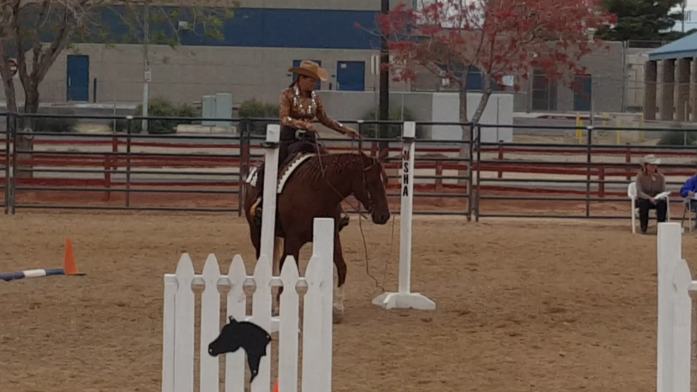 Then, the buckle winners were announced, and we won! Which, you guys already know, but still it was really great. Amber and I won a buckle for one show in 2016 for walk/jog to get us back into a show mentality as well as getting Amber used to showing, but this was canter. Amber is not your winning western pleasure horse, though she is very nice to ride. It just meant a lot to me that I could showcase Amber’s true versatility, her “everything pony” attributes that I know she has and can succeed at many things.

Unfortunately, after we were back at the trailer and packing, it was clear that whatever hitch I’d felt in her step was bothering her. She was very careful with her leg, didn’t want to put undo pressure on it, and of course, my heart sank. Looking back at the videos, I can see in the western dressage, and a bit in the trail that she was short in that hind leg. Except for the beginning of the horsemanship pattern, I couldn’t feel that shortness. She was so responsive with everything, and unfortunately, perhaps I’m used to feeling her a little short on that leg since she twisted her hip that when she was a little off it felt normal.

Either way she was happy to be home, and I gave her some bute in case something was swelling. Just like Saturday with it being weird, my mom and I brainstormed what in the world she could’ve done to her hind leg to have such a reaction by the end of the show. After a few hours, video watching, and feeling around on Amber, I think it was her kick on Saturday. I went over and over our rides the previous week, how she felt Saturday morning, and I couldn’t find anything to suggest I’d missed something before/at the start of the show. But I might have felt something Saturday after she’d kicked. I brainstormed for Sunday, too, and she actually felt super that morning. But then, she had those few very jarring stops in reining. And her right spin was on her inside hind. Then, she’d tripped over a pole while practicing trail. Maybe her body compensated in a weird way to where then she was sore for horsemanship? Then after that, we kept moving, didn’t stop too much or for too long and every time I looked at her she was walking okay. So my mom and I think she strained something when she kicked. Because she kicked out hard, and I don’t think I’ve ever seen her do that. Kick at another horse, sure, but that was when she sidled to the fence and kicked the fence. Not too hard, but certainly not out to the side and with the acrobatics she displayed Saturday. So then after straining or pulling a muscle, it wasn’t worked too hard Saturday so after a bit of rest she was fine Sunday, but then the reining perhaps took it over the edge.

Which of course I feel terrible about continuing to ride her, but like I keep saying – she could have her hoof dangling or something and she’d be like “it’s just a flesh wound!”. Ugh, mare, I swear. Sometimes I do wish she was a special snowflake, but nooooooo. She has to be stoic about pain. I’m going to try to get a phone consult with the vet that saw her for her SI injection. I really like him, and if he’d like to see her maybe he can make a farm call since I really don’t want to trailer her again for a bit. It’s 45 minutes to an hour drive to the vet, and with her being uncomfortable I’d rather not restrain it after I might have restrained it by continuing riding lol. I’ll for sure keep you guys updated, but needless to say, we’re both exhausted!