Amber gave us a good scare Wednesday night and all of yesterday. She was starting to look a little down on Wednesday, but I thought it was probably the nature of how after surgery progresses or whatnot. She’d gone off bute Monday morning, so perhaps she was really starting to feel the surgery now. And then she wasn’t wanting to put much weight on her right hind leg at all. Her leg remained cocked and as I continued to study her, her nostrils were a bit distended and she was drawn up in her belly. I quickly made up her grain with bute and stuck it right in her face. NOTHING. She even turned her head away.

That horse is like me – she never turns down food. Especially something as delicious as her grain. She didn’t feel hot or anything, but then she laid down to roll in her stall and lightbulb. When Whisper is really hot and sweaty and upset she rolls. So although Amber didn’t feel extra hot, I was sure she was. So I quickly got her in the crossties, and she didn’t move a muscle when I went to hose her down. Usually she protests her baths, and this time, she relaxed and stood still as I left her wet with both fans on her. She was immediately breathing easier, and interested in her grain again so phew. Bullet dodged.

She continued to be very ouchy on her right hind for the rest of the afternoon and her left leg was starting to swell more due to most of her weight being on that leg, so I texted my vet and asked if I could ask him a few questions since I was starting to get a bit worried. When he called me (bless him lol) I asked if any of this was normal, and he was like “yeah, no it’s not.”

He continued and said it could be an infection if there was a small bit of the suture that didn’t come out and was still in there but because there wasn’t any sign of drainage or puss (the skin has really been knitting nicely and the bumps have gone down even) we didn’t think that was it (THANK YOU because if it had been my fault with the sutures….). Other than that he wasn’t completely sure and asked that I take a video of her being hand walked in the morning and send it to him so he could see how she was walking. I gave her a lot of bedding so she could hopefully sleep easy, and then proceeded to hunt through RW and SP for anything to maybe help. I quickly nabbed some rehab pellets from SP that Amber had been on for her previous surgery (because hell it can’t hurt, right? lol). So that’s on it’s way soon. 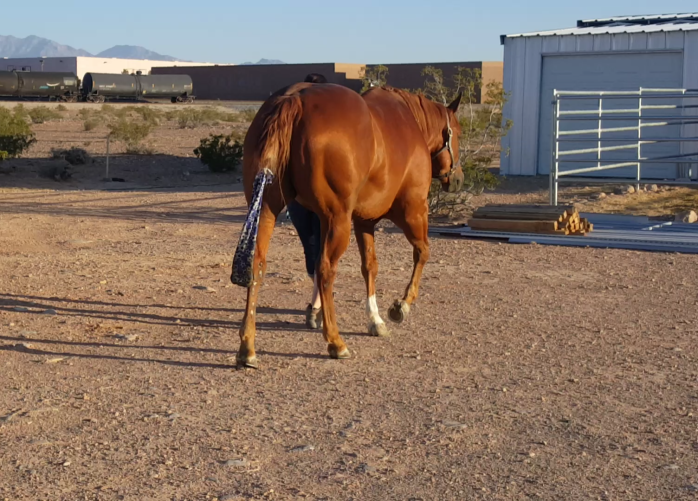 I sent it to the vet, and THANKFULLY he said she just looked a little stiff from being stalled. So she can start her time outside in her run a few days early, and she can start being hand walked early as well. So that’s really good news that she’s still healing quickly. I swear this horse is giving me gray hair and heart attacks lol.

7 Comments on “The special one”