The rains really hit today, but thankfully it wasn’t so torrential like it was on Monday. A light drizzle most of the morning with some heavier rainfall every now and then. But the most important thing was that it was only 83 degrees by the time I got home from work, still cloudy, and perfect for a ride. It was pretty humid, but that didn’t really matter.

So, because of the cooler weather I decided to finally try my Horze full seat breeches. They’re a bit thicker in material, and certainly not specific for hot weather. But they felt better this time than when I initially tried them on, and so far I really love them.

You can see how long these are and that they still bunch at my knee even though they’re right on my ankle bone. The website doesn’t have any length specifications but I think these will still work fine for me at least. 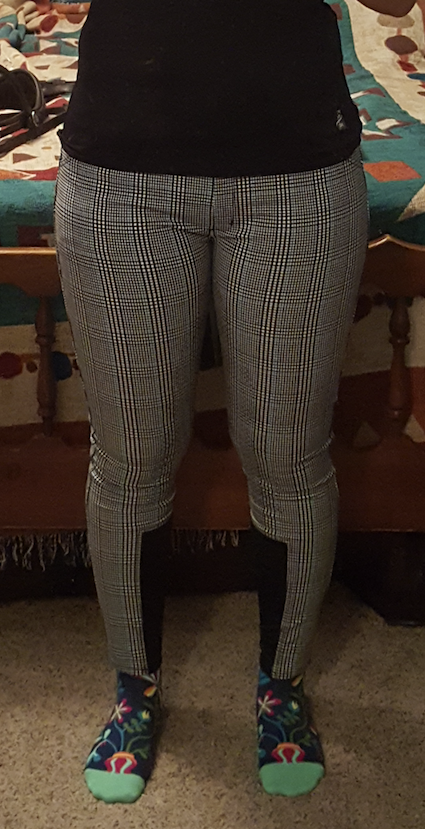 So far as I can tell in the saddle they’re very flattering, and I think the color is super fun. Of course because now I can get a light blue pad to match…. But the full seat didn’t feel restrictive at all like I thought it might – it just seemed to give me that little extra stick when I needed it. Amber nickered for me when I came out and was excited she was almost all over me. Of course, after the wonderful curry and stiff brush was done, she was back to her usual shenanigans and letting me know just what she thought of the process.

I finally remembered to wear, much less USE my new watch, and started creating a base to grow on. We were well on to a good warm up when my mom came out, offered to take pictures and to move a pole that I’d forgotten to. Of course, can’t say no to pics! Amber was again very very unenthused about a photoshoot.

But I decided to try something new today. That pole I put in the middle of the arena was more to begin putting pieces together. She doesn’t usually canter over poles, and the last time she did she got nervous. But this is a flat arena, and she’d been feeling pretty mellow all throughout our warm up. So because we’d focused on lift and suspension on Saturday, I wanted to take her mind off of that and work on my position, holding her through a turn, and then calmly going over the pole. A different exercise to shake things up and do something different.

This is something that I will have to “retrain” her to do. We’ve done the reining thing for a good 3-4 years, so my weight shifts back, even in 2 point, and she’s there slowing down. Most of the time to a trot but it’s just going to take a little time for her to realize it’s only to slow and lift. And hell, she figured it out so quickly. Now the challenge will be to make it consistent, but I know we’ll be able to get it done. But with her being relaxed and super willing to slow down really helped me to build more confidence in her and the exercise. I even sat back (ish) and held her a bit before the pole and she willingly checked herself just that bit and stepped over it nicely. Of course, it’ll be a different story and more to work on when that pole gains height, but I think we’re okay for now. 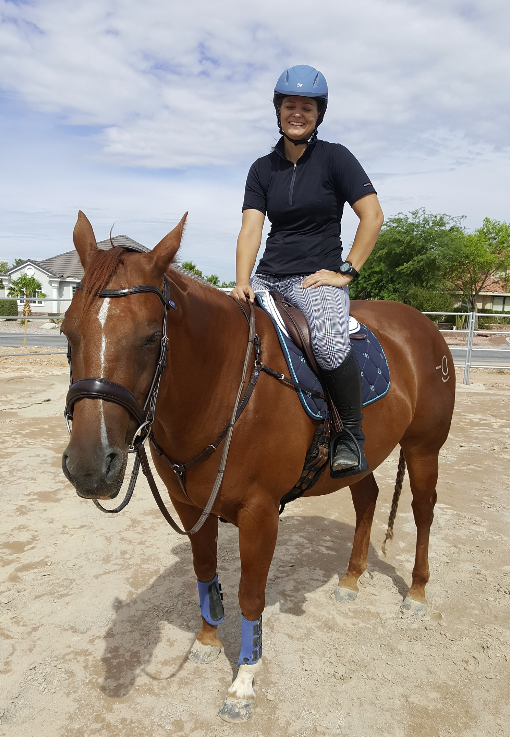 It was absolutely a great exercise for us both. She had to get used to and understand my different position of balance, and it really made me realize this tank would probably be a great hunter. Going to that pole she almost never changed pace except those two times I took a hold on her. It didn’t even matter that she spliced the poles. She was confident and willing. It was such a good exercise to just take our minds off of the mundane ’round and ’round.

We’d hop over the pole, break to trot just before the corner and smooth into the other lead just as we turned out. She was really good with that. Overall, it felt like a huge success today. I felt better in my 2 point, opening my chest and keeping my torso up (and full seat breeches sure helped with stability), and she felt just super relaxed yet attentive. She wasn’t wildly falling in like she has in the past, nor rushing through the corners or getting upset when I had to take a little more of a hold. I think she’s finally really starting to settle in to the place, but I think she’s really beginning to understand the new things and so we’re making some great progress.

We probably only rode for thirty or so minutes, but it felt like a such a nice, fun, rideable ride. I’ve missed having challenges to work on with her, and I think once she gets a few fun jumper fences to look at she’ll be well on her way to enjoying it, too.

← Review: Harwich Half Chaps
Down days →

6 Comments on “Let the fun begin”