I had every intention to post yesterday…. That didn’t happen. I had some great rides, got great pictures, but Wednesday my sister came to town with her daughter, who’s now walking and talking a bit, so of course I’m spending time with them. We have an inspection at work coming up (though the final day hasn’t been decided) so I’m trying to get everything sorted for that EARLY since everyone at the office tends to be last minute procrastinators like me.

Not to mention we’re all going to the Ren Fair (Age of Chivalry) today, and then tomorrow and Sunday Amber and I show, and I’m looking at work and my afternoons and just trying to nod and say “I can do it” lol. Amber got ridden yesterday, may or may not get ridden today, and we’ll see how that’s going to go for the show. Probably the same as last time. But, for today’s post, let’s recap and start at Tuesday, shall we?

We took our usual hack after a tough jumping day, and after massaging her again (did a bit the previous evening) and doing a few stretches we headed out. This was probably the best she’s ever been going around the desert. She’s never been bad before, but this time she kept up that long, easy walk I’ve been working towards in the arena. She just sauntered out there, and I think she’s realizing it’s becoming a routine and that she also really likes going out there. She wants something to focus on, and this time we did the itsy bitsy ditch the other way. She looked down, was confused for perhaps a second, then seemed to shrug and did this teensy arc over the ditch and then settled right back down like we’d been doing it all week.

We went a little farther than normal but came back through familiar territory, and she took everything in wonderfully, and I could tell our last time out working on steering had helped. She was much more willing to take direction from me this time, and it was a really really pleasant ride on Tuesday.

Wednesday she was great. Walked out as calmly as she had the previous day, keeping that long, sweeping walk in mind. She got a little stabby in her walk at times, but was much quicker to settle into that pace. She was a teensy bit slow in the start of her trot, but she actually came around really nicely and again didn’t have that downhill dive she did before (YAAAASSSS thank god). She got tense waiting for those transitions, but now that I’m usually asking for the canter from the trot, she’s getting less touchy about them. Learning that she doesn’t have to do it that instant, but within a stride or so. Waiting is always the best game with her. If I work at home making things slow and asking her to wait on me, at shows when she’s fired up she responds much faster, so it works out in the end.

Since her trot is a little more established we worked on that a little more. This time there was a lot of new stuff to feel after western. With both hands and light contact, I could feel her leaning on my left rein. To the right she was leaning on that rein less, more pushing into it but understanding it was a barrier, and the trot work felt fantastic. To the right, I felt her fall into old habits, and as she fell into those so did I – letting all my weight sit to the outside and completely losing my left leg. I’ve been realizing that while I need to use that spur, I can’t let my weight shift like that and lose the support/boundary of my leg for her.

I tried the softest approach first, a little leg, but she seemed dead to that so then I just tightened that inside rein more and kept it at the base of her neck. With a little more spur added, I tried to be steady as I posted, and within a couple circles she was starting to lift back up to that outside rein. I think getting her teeth done has been exactly what she needed. She was super soft, and a little low headed, but I can work on that a little later.

Her right lead was still a little tougher, but after a bit of work and regrouping, she was cantering better. It’s been getting better as well the more I try to remember to keep my hips straighter. It feels like I’m so off and sitting so weird but I know I’m not because when I sit better, it’s allowing her to relax better and (I think and hope) push both hind legs underneath her instead of just tilting her hips to the inside.

I could tell the reining work we’ve been doing helped her left lead. In the more energetic trot she was reverting to old habits and yet in the canter I put my left leg on and instead of pushing into it she really tried to round out for me and stay relaxed and focused. She’s absolutely getting there, and I’m excited for the show.

Thursday I finally hopped on late afternoon as soon as I got home from work. And guess who came out to see the pony?! Yup, this cutest of nieces. 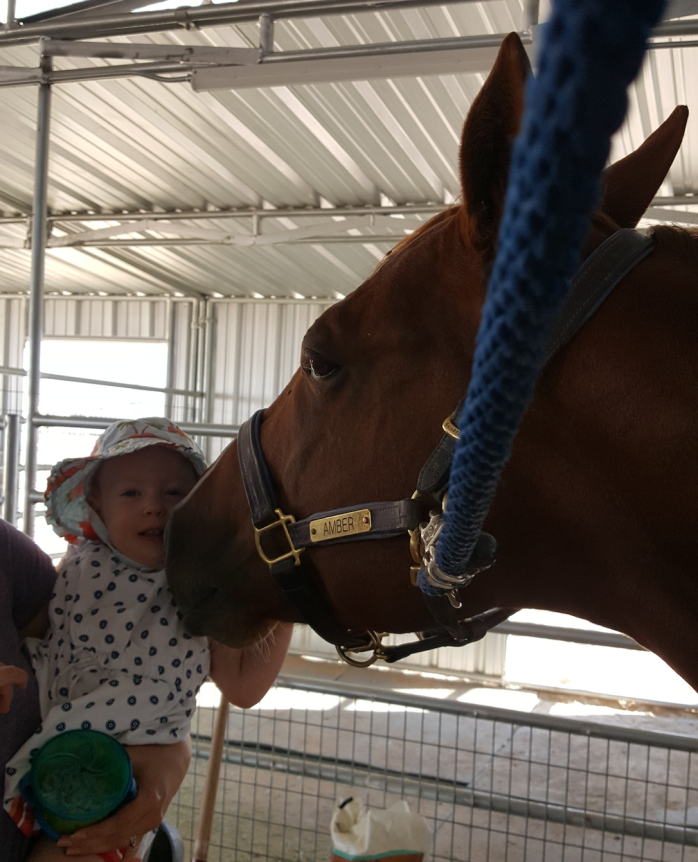 Amber absolutely adored her. Just wanted to sniff her and was like OMG LET ME HAVE THAT TINY HUMAN lol. Just loved her. Kaylee flittered around Amber’s legs and that mare kept both ears on her and barely moved a muscle the whole time Kaylee played around. I was so proud of Amber.

Kaylee was a little unsure of the horses at first, but it’s so cute because if she hasn’t seen you or the horses for longer than 30 seconds to a minute she’ll say “hi!” and wave. So adorable. She kept saying hi to both Whisper and Amber, and she brushed Amber a bit and good little pony stood stock still. So then of course we had to put her on the pony! Kaylee was thrilled. Just loved it. I was a little worried she’d want down after we walked for a bit so I handed her back to my sister and Kaylee cried! She desperately wanted to be back on Amber, and when we’d ask if she wanted down she throw herself back into me and shake her head. We were all laughing so hard. It took her a bit to realize we weren’t leaving as I was riding around to say hi to her and she’d wave at me and watch Amber. Just the cutest niece ever.

As for the ride, Amber seemed a bit off, and my mom helped me by informing me she still seemed short in that right hind. And she felt more stabby today, and was very tight over her SI. Probably time for me to take her over to the vet and do her SI. So, in lieu of that I’m not sure how many classes I’ll do Saturday. I may keep it short and sweet with a jackpot class and dressage intro, but I’d like to have her feeling better for the western day. That counts towards the buckle and I’d like to compete for that but of course if she’s really not doing well then I’m scratching.

But her canter came around really well, and it was even really super both directions. Just needed a bit of lift as usual, but I wasn’t asking too much because of that leg. I just didn’t want to make things worse, and when she realized I wanted her to just relax, her trot got much better and softer to the left and she relaxed in the canter work so I’ll take it. But today, on to the Ren Fair (of which we should get many pictures) and we’ll see how the weekend goes!

3 Comments on “Busiest of weeks”