Posted on September 20, 2017 by the_everything_pony

Tuesday I had limited time to ride between getting home late from work and then dusk being upon us very quickly. But we made it out there as fast as we could while still taking enough time for stretches. I of course had to dress her up in most of the new stuff.

I was taking another gamble with it being a little later in the evening and her issues with that, but figured it was another bit of strength training and just a switch back to English to see where we were after western. If she was starting to lose it a bit, we’d just stop and call it a night. She was pretty looky when I first asked her to trot, but after a short side of having my leg on her and reminding her that this is work, too, she settled into the contact with a bit of “I remember this!” Good girl.

I was very relieved that our week of western hadn’t caused her to fall on her forehand like she had so horribly last time. It almost felt that we hadn’t even missed a day English (furiously knocking on wood to make sure it stays that way). I kept it nice and easy but keeping in mind the things I worked on this past week in western – just in more contact with smaller spurs and posting trot. And she did really well.

Especially to the left at first she was overreacting to my aids and I knew that was from my “fix the shoulder” and not “train the hind” so I tried to take it with a different approach and it seemed to work alright. We only trotted for a bit.

But true to my plan I cantered a lot more this time, keeping in mind bend but also replacing that weight over the inside. She anticipated a lot at the walk to move into the canter, but that’s really something I don’t mind. I worked on a bit of transitions, and the second time cantering around just mostly focused on maintaining pace while letting the rein go a little. She tried relaxing into it very nicely – even though she’s not too successful at it with lack of strength. 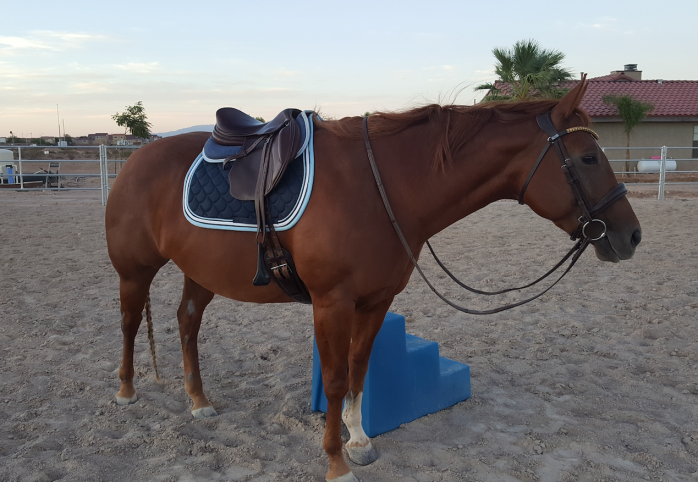 I quit there. Didn’t even do the left. My main focus was assessing where our English was after western, dispelling a few “habits” we (me) have gotten into and to change the way we think about it, and if there’s time, do a bit of work on something. It was only a 30 minute ride, but I felt we really accomplished that well. And considering it was dusk and practically dark by the time I hopped off, I counted it doubly successful. She was still a little worried, but really tried to focus on the ride. Good girl, Amber!

Riding longer to pick up her strength is important and something I want to work towards, so thankfully after switching days at work I get off at a good time today and the next 2 days before the show. Lots of time to work on that then!

All the lights in the barn got finished, so it’s in perfect timing for the days getting darker earlier. So, we’re all set to go for a good ride today as well as to start packing up the trailer. I think I’m looking forward to that the least….