Posted on November 8, 2017 by the_everything_pony

Amber and I are hard at work. She’s doing phenomenally, being a Super Good Girl. Her jog, being more solid before our transition to more English this summer is good but….worse in a way haha. Not that she’s not uphill. She is. She’s just being lazy and wogging. (which is a mix of walking and jogging – it’s not a true jog or a true walk – like troping lol) Not badly, and nothing we can’t honestly fix.

I was disappointed in myself Monday. I seem to have no control sometimes when my brain seems to switch severely to a different mindset when I ride western (oh hey, baggage; yes have a seat on my shoulders), and I was expecting a few impossible things with her that day. Impossible meaning expecting a different headset or pace when I know we’ve been working on different things, or getting frustrated when I know I haven’t worked on something with her but she’s just not doing it like she should (even though, you know, she doesn’t know). And after a much needed self-scolding, I brought myself around and finished the ride on a good note.

Monday still had some good practice in there, so I just kept it going for Tuesday. Again, I tried to keep things the same and yet get some different things in there. Amber’s canter has been doing super in English, so in lieu of that I shortened my stirrups a hole, and took a loose hold on her, sat my upper body like dressage and bore down with my abs. And her canter was great. I even let out the reins a little, and she really remained nice. I have to admit the western was just what she needed for lifting her sternum on her right lead. I think she’s still realizing she’s able to do it just as well as her left lead. 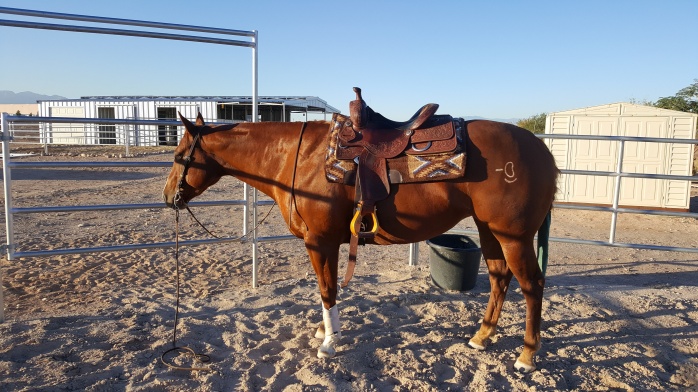 We practiced those canter poles again, only a few times, and she leaped one again. Both my mom and I laughed. So we tried once more and while she spliced the first, she’s handling me turning her tightly well, even though I never ask her for that. Our horsemanship pattern is coming along better, and while we sort of missed a departure because I said “yes!” to her and she was went “oh, okay, I had the right thought” and didn’t canter, we still had to canter lol. So we bumbled through it, almost nailed the walk and picking up stirrups, and then had a gorgeous right lead departure. So I hopped off and gave her many pets and head scratches and love.

I’m actually not too worried about the trail. I think we’ll be okay in that one, even if we jump lol. She’s been really great with that, and while we may or may not do well in our horsemanship pattern, I think we’ll do okay there too. Leads will still be an issue in reining, but hopefully, with our work on simple changes, our ranch riding will be a little better! I’m going to try to do a ride Thursday but….with it getting dark by 5 and me getting off work at 5….not sure how successful that will be. But we’ll try and see.

Friday will be our last ride before the show, and then I’m going to go all out for this one – braiding! Both days. My fingers will be dying.

NaBloPoMo Day 8: About the barn where you board

Well, the ponies are in the back yard! It’s actually super super nice to have them there. My mom and I were pretty stressed with having them at the other place, but I think they absolutely love it here!

The barn is a simple 36×36 with outside runs. There are officially 6 stalls, but 4 are semi-enclosed and 2 are fully enclosed and are used as the hay barn and tack room. Seeing as the place is ours, the girls have the run of both indoor stalls on their respective sides. Since there are no other horses either, the runs did not have to be divided, which allowed us to give them very decent sized runs. Amber’s run is only 24×24, seeing as she’s on the hay side and we really don’t want her smashing the garage hay barn door when she’s having a fit. Still, she technically has a 48×48 stall when including the indoor portions. She’s naturally a stall walker, so to encourage this we divide her food at feedings to encourage her to walk out of one side and into the other side. The indoor stall divider is kept as more of a support for the barn.

Whisper only has the run of one indoor stall at the moment since we’re waiting on concrete so we can put the extra mats in that second stall. But, though the inside stall is only 12×12, her run is 24×36 since she’s on the tack room side and the run can be extended all the way to the end of the barn.

Amber is absolutely loving her new digs. My mom often sends me pictures of her laying down to snooze in the sun. At the other place, her stall was barely large enough for her to lay down, much less very hard even though I tried laying down shavings (somehow within 2 days 2 bags of shavings would completely disappear. Hmm…). But here, with sand, shavings and pellets she loves laying down in the softness and standing in the sun. Right now, Whisper’s side is getting the most shade, but it works out for both horses. Amber hasn’t grown much of a winter coat yet, and Whisper has poofed out like wooly mammoth, so the shade feels GREAT to her right now. Perfect!

The arena is nice and huge, with plenty of space for the both of us to ride in. Just big enough for a small jump set-up, and anything else we want to do. We feed the horses 3 times a day – sometimes 4 if they need. We muck 2-3 times a day as well along with ordering fly predators that help keep the flies down. We have close access if Amber needs a thin cotton sheet at night, and it’s very time efficient to have them so close. Plus, I can go out and hang with the horse any time. She’s also much happier now that she sees me more often.

Unfortunately there’s no pasture, but hopefully we’ll be able to use the arena as a turn-out soon!