And what a lesson it was! Part of me wished I had another one Sunday because I feel like Amber and I made so much progress Saturday morning. Instructor took videos of us, and while I didn’t take any pictures (and there was no one else out who could’ve), she hasn’t sent me the videos yet, so I’ll try to post them as soon as I have them. So, in the meantime, enjoy some older photos of Amber.

Saturday morning Amber was not excited to get into the trailer, but thankfully it was an uneventful drive out to Pahrump. She didn’t know what to do with the peacocks that would walk by and spread out their beautiful tail feathers, but she mostly just stood there and stared at them. And snorted. But thankfully not stupid.

I haven’t taken her anywhere in a while, and while she’s never been stupid, I’d been prepared for shenanigans because she’d had a week off without really getting out due to my schedule. But she warmed up okay – a little looky but definitely not fired up like she has been a few times. Once we started, Instructor actually had to shorten the walk poles for her because she kept chipping in strides. Part of that may have been because she’s not as comfortable moving that right front over, but I agreed with the instructor – she wasn’t thinking forward and rhythm. At one point Amber had a huge fumble over the offset walk grid, and that really seemed to be a wake up call for her.

Meanwhile, I was getting a few wake-up calls as well. She was challenging me to challenge my pony, to push her out, to keep my thumbs up, to not look down at my diagonal, to really focus on where I’m going and to hit my markers. Because she really highlighted some habits I’d gotten into. Not bad habits per say, but just habits from when I was reining that do not help me with with english at all. I was so lax on hitting my markers it was ridiculous. Half of the time I wasn’t even aiming anywhere even though I was “aiming”. At one point she said, “Did you actually focus on a point or were your eyes all over?” And I had to answer that yes my eyes were all over. Poor Amber. But she went and tried anyway.

I also found out some habits that were making a comeback from years prior. My hands may be light, but boy are my fingers fidgety when I’m in 2 point. I had a huge urge to grab mane and cozy my fingers up the reins to keep contact, but her goal for me was to put Amber in front of the grid, then let her figure out the footwork and that when I did my part, her part was to stay straight and rhythmic. It was a really good challenge for me. We can work on getting the right contact later, but for now, for this exercise, this is where we are. Also, my 2 point at an energetic trot is crap. I really need to get back in shape.

There’s a few things I’ve become complacent about that she really challenged me to stop. Like looking at my diagonal. When you don’t have someone challenging you and watching you, you forget you learned how or that you know how and that you’re really just being lazy. So I made it my goal that once Amber jumped into a trot to feel that shoulder moving. Sometimes I got it. Most of the time I didn’t. But it’s a rusty skill I need to polish.

It was really awesome after Amber had a flub in the walk grid to feel her really focusing and really using her shoulders and butt. I can’t wait to see the videos. It also really helped her trot to lengthen and for her to learn she could really use her body to push off the ground. It was an awesome feeling. She had a bit of a trip in the beginning, mostly felt like her knee almost gave out, but when she really started to use her body, she felt 100%. Not a lame step!

Instructor also challenged me to expect more from Amber. Before this new place she’d been fine, but we’d also had a purpose with many of our rides. I realized after Saturday’s lesson that we’d lost much of our purpose, and along with that we’d lost our work ethic. She had lost hers, and I had lost mine. I also realized after a few times she threw attitude that Instructor had me correct that I’d been complacent on that, too. And it was a nice kick in the pants to realize that if I hadn’t lost our purpose, if I hadn’t let us both become complacent, my spill on Sunday wouldn’t have happened.

By the end, I was extremely happy. And though Amber had some attitude, I think she was happy, too. We both had a purpose for that day. It wasn’t just let’s do whatever today. We had a mission, and we had to complete it as best as we could. At the end of the ride, I also realized she felt a lot more like the Amber I’d had a year ago. She was focused, she was really listening, and the coolest thing? She was actually beginning to hunt out the grids. It only happened maybe once or twice, but her ears locked onto a grid, and I felt her assessing it before I had to steer her to the next one. It was a really cool feeling, and one that I realized I severely missed.

This is the reason I ride horses – the learning, the bond, the partnership. And we haven’t been learning for a while. That’s what made these past five years with her so special, I think – we were doing tons of new things and learning together. We just…stopped that. This just really gave us such a great focus as well as a humbling adventure. I did make excuses for us sometimes, but Instructor kindly refuted me, and told me I had to expect more of the both of us. And she was completely right, but she did it with firm kindness, which is what I respond best to. So now, after a slight hiccup, we’ll be going back to learning together, and strengthening our partnership. 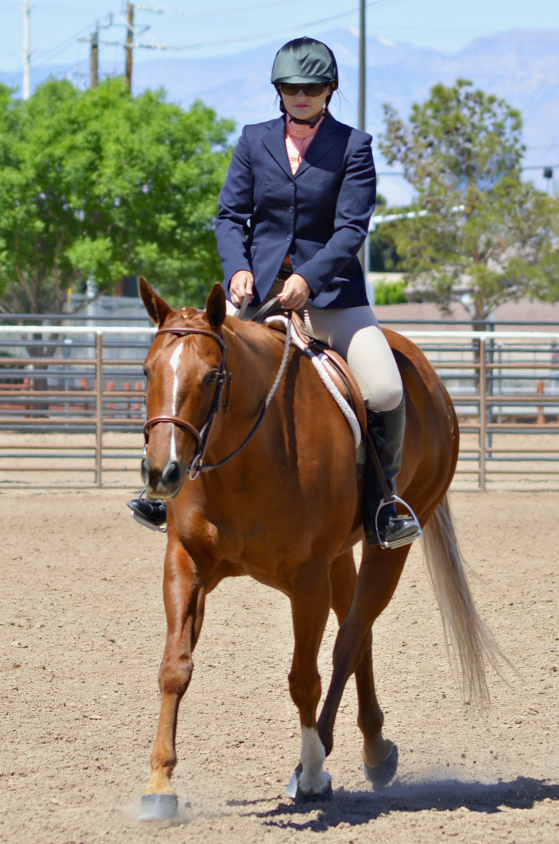 I’ll have two more long days including today, then I’ll have short days with plenty of time to think up exercises and a purpose for Amber and I while our barn is being built this week. But it really felt like we broke through a wall with this lesson. I can’t wait to practice and attend session 3.

Compared to the high of Saturday morning, the rest of the weekend was very uneventful. Saturday evening we watched some old shows and drank wine. Sunday we took some extra dirt the graders had pulled up to make a ramp up to the pad for the barn. The wind was gusting to around 40 mph, maybe even 50, and Vegas is really such a dustbowl that you even inhale and your nose and mouth are full of sand. Not very conducive to riding. But we got one part of the ramp done before the extra dirt was done and the winds got worse.

Amber didn’t seem to poop or eat as much yesterday. I’m not sure why. She’s always been an excellent drinker and hasn’t shown any previous signs of heat stress, even when many others were colicking. But I’m still worried, and it only seemed to start after her injection, so I’ll call the vet today and see what he says. It could be that she’s had two trailer rides in a week and it really stressed her out because I don’t usually haul her anywhere, but I’m not sure. So, a call it is.

Sunday evening my sister came over with her dachshund and we shopped for a bit then chatted while she finished homework.

More wine was involved as well as homemade pound cake, and overall it was definitely one of the best weekends I’ve had in a while.

← Review: PS of Sweden 3-point breastplate
The barn is here! →